I’ve always said I have the best security system ever – two very large dogs. If you’re not quite so fortunate, here’s a story about our Barking Dog Alarm. 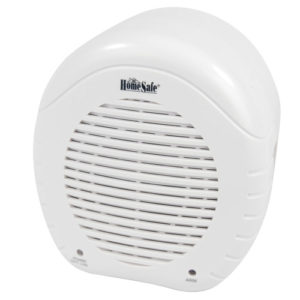 The following is a story how the Secure Dog was utilized.

Even as the neighborhood got a little more unsafe, Marshall kept the peace. Jake’s store was the only one on the block without any graffiti. Nobody, it seemed, wanted a run in with a big, angry guard dog.

Few people knew that Marshall was really a sweetheart, lavishing Jake with kisses every time he’d open the store in the morning. Jake’s daughter, Melissa, kept the store’s books, and paid a visit to her father every Thursday.

She knew the old man couldn’t afford to install a state of the art security system. But she also knew that he was a little too fragile to try and train another big dog. She brought her father a gift on her next visit.

“This,” she announced proudly, “will keep Marshall’s legend alive in the neighborhood.” She explained to Jake that the Secure Dog used infrared sensors to watch the store at night, just like Marshall did. When intruders showed up at either the front or the back doors, the box would bark. And it would bark louder and louder until the disturbance went away.

That Saturday night, two teenage boys strolled up the sidewalk. The midnight streetlight stretched their shadows halfway up the block. They banged and pulled on security gates as they talked about the trouble they could cause.

“I think I heard Billy say something like that,” replied the short one,

“I could sure use some new sneakers!”

They hustled up to the front window, but before they could even try to break in, they heard loud barking from inside the store. And it was getting louder.

“Yo, I thought you said that dog was dead,” cried the short hooligan.

“He must have got a new one,” said his partner in crime, “I ain’t messin’ with no dog!”

The two juveniles hustled away around the corner as fast as their legs could carry them. Marshall’s legacy remains intact. He’s still a presence in Benson’s Sporting Goods, with a picture above the cash register – and the loud bark from the Secure Dog.