Save 25% when you buy the bundle. Create your own color combination, too! This women’s safety combo includes a stun gun/alarm/flashlight and a pepper spray that you can carry on a keychain or strap. Not available in NY State due to pepper spray shipping laws.

Select a color for your stun gun and for your pepper spray below. The prices below show what you would have paid individually. You will only be charged the bundled price. 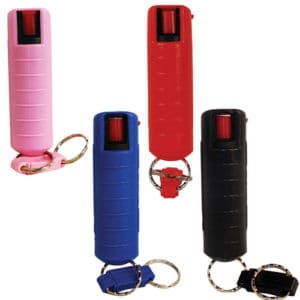 The Multiguard Stun Gun, Alarm, and Flashlight combo from Thugbusters provides 3 protection levels. Blind an attacker with the 120 lumen flashlight. Draw attention with the 120 dB alarm. Bring him to his knees with the 20 megavolt stun gun, which can be used in flashlight or alarm mode.

The MultiGuard delivers super powered protection with cutting edge micro-technology. Featuring a super-loud siren to draw attention, you may defuse a dangerous situation before it begins! It has a blinding 120 Lumens LED flashlight and a rubberized coating for a better grip. Electrifying stun feature operates with flashlight or siren on. You can carry the MultiGuard  in your hand or pocket. Built in charger and heavy duty nylon belt loop holster included.

• 4.9 milliamps depending on the freshness of the batteries
• 20 Milion volts
• Measurers 5 ¼” x 1 ¾” x 7/8”
• Rechargeable built in charging prongs plug right into a wall socket

In addition to causing an attacker pain, The Pepper Shot 8.5% oleoresin capsicum formula swells the mucous membranes, which makes breathing difficult, and swells the veins in the eyes, causing the eyes to close. It’s made from 2,000,000 SHU’s of raw pepper and these effects can last up to 45 minutes and cause no permanent damage.

Has a UV identifying dye to help aid in the identification of an attacker. Pepper Shot ½ oz. Pepper Spray has a range of 6-8 feet and comes with a hard case. Each unit provides 6-10 one-second bursts and comes with a quick key release keychain, and safety lock.  3 ½” x 1 ½”

There are no reviews yet.